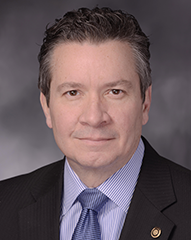 Mr. Leara began his political career as president of the Concord Township Republicans in 1997 and subsequently appointed Committeeman of Concord Township in 2003, re-elected in 2004 and 2008. In 2008 Mr. Leara was also elected to the Missouri House of Representatives. While serving in the Missouri House, he served as Chairman of the House Committee on Pensions, Joint Committee on Pensions and Administration & Accounts Committee. Mr. Leara also served as Vice-Chair of the Missouri State Employees Retirement System (MOSERS). Mr. Leara was re-elected in 2010, 2012 and 2014 serving until his retirement in January 2017. Mr. Leara is a member of Abiding Savior Lutheran Church in St. Louis and in his spare time, enjoys restoring muscle cars, motorcycles and military vehicles. 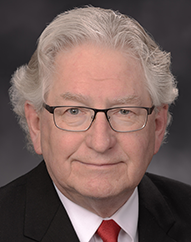 Pat Conway, (St. Joseph) is a lifetime resident of St. Joseph, Missouri. He served in the Missouri House of Representatives from 2010-2019 for the 10th District. Mr. Conway was Buchanan County Clerk from 1983-2010.  A Vietnam Veteran, Mr. Conway has served on the Missouri Veterans Commission and is a member of the Knights of Columbus, the American Legion and several other military and civic organizations. He’s a graduate of Missouri Western State University with a Bachelor of Science degree in social science.

David W. Hane, (Laclede) is the former city manager and police chief of Brookfield, Missouri. Hane was appointed as a police officer in 1975, then as police chief in 1982 and served the community for 38 years. He was appointed as city manager in 2005, serving in both capacities until his retirement in 2013. David is a graduate of Meadville, Missouri schools, earned a BS in Criminal Justice from Truman State University in Kirksville, and is a graduate of the FBI National Academy in Quantico, VA. David is a member of several law enforcement organizations and also has volunteered his time to the Brookfield Lions Club, Brookfield Chamber of Commerce, and the Brookfield Area Growth Partnership. 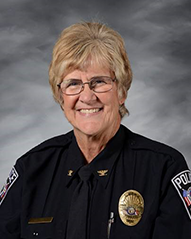 Jan M. Zimmerman, (Kansas City) Commissioner and Raymore Chief of Police Jan Zimmerman began her career in law enforcement in 1979 as a dispatcher with the Kansas City, Missouri Police Department. She attended the Police Academy at Kansas City and was sworn in as a Police Officer there in 1982. She rose through the ranks in Kansas City, holding assignments in Patrol, the Chief’s Office, Human Resources, Narcotics and Vice, Financial Services, Information Technology and the Training Academy. She was ultimately promoted to Major, which was her rank when she retired to accept the Chief’s position in 2012. Chief Zimmerman is a proud alumnus of both the FBI National Academy in Quantico and the Southern Police Institute at the University of Louisville. Additionally, she holds a Bachelor's Degree in Criminal Justice and a Master’s Degree in Public Administration from Park University. Chief Zimmerman is married to retired KCPD Deputy Chief David Zimmerman, and has two daughters and three grandchildren.